Whole House Surge Protectors Can Save You Thousands of Dollars 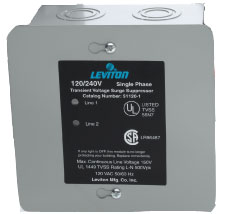 An electrical surge is a sudden increase in power that flows through the wires of your home or business. Surges can cause damage to computers, phones, entertainment systems, microwaves, stoves, fridges, washers – any device that has electronic components such as sensors and timers. Today, that’s most appliances. A Whole House Surge Protector can save your appliances and electronic devices and save you thousands of dollars in damage.

Damage due to surges is not new. It’s always been the case that if the electric utility accidentally sent a surge of electricity through your wires, it could wipe out phones or appliances. However, today’s appliances with their electronic components are more sensitive. Smaller, more routine surges, can damage them. This is the reason that many people protect their computers with power strip surge protectors.

When Do Surges Occur?

When power resumes after an outage or anytime the power from the electric utility company fluctuates, a surge can flow through your wiring. Surges can also occur when appliances in your home turn on and off.

How Can I Protect My Family’s or Business’s Electronics?

However, power strip surge protectors vary dramatically in quality. Some are effective while others offer little or no protection. Surge protectors work only if your electrical system is grounded, so it’s also important to have an electrician check your electrical system for grounding. As a note, a home can have three-pronged electrical outlets, making it appear grounded, without actually being grounded. An electrician carries an electronic tester which can tell you for sure.